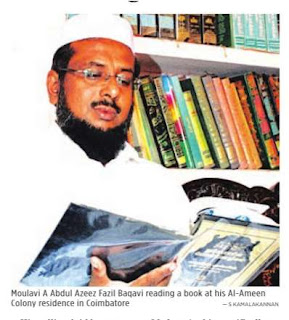 WHEN you think of a Pesh imam, you imagine a person who spends most of his time in
mosque and giving religious sermon. You don’t expect him to be tech savy. But moulavi A
Abdul Azeez Fazil Baqavi is a cut above the rest. A double MA in history and an M.Phil
student Baqavi is focused on creating awareness about computer literacy among moulavis.
To his credit he has developed many Islamic Tamil websites besides blogs.
“I wish to educate imams so  that they can use internet to update their knowledge and to
have better understanding about the happenings across the globe. One of my first blogs
was exclusively for Vellore Al-Baqiyathus Salihath Arabic College alumni,” he said about
libas07.blogspot.com.
His vellimedai.blogspot.com was an extension of his religious duties. Its content was
aimed at helping imams to give information packed sermons on Jumu’ah (Friday) prayers
instead of the stereo-type lectures.To create awareness about the benefits of internet use,
Baqavi has already conducted six seminars across the State.He is currently pursuing
M.Phil and his thesis is on  Modern Arabic specifically on Prophet Yousuf ’s life. For his
thesis he is being guided by DrP Nisar Ahmed of Arabic, Persian
and Urdu department at Madras University. Baqavi plans to take doctorate
as well.
His web portals include  www.darulquran.net (first Tamil website for Holy Koran),
www.rahamath.net (first Tamil Hadis website) besides his azeezbaqavi.blogspot.com.
Posted by Vellimedai at 8:05 PM